A generally decreasing trend of industrial accident rate / number was recorded in the last 13 years. Whilst there was an improving performance in most categories or sectors in this aspect, improvement in fatal accident rate was not obvious. There was a general trend of improvement in terms of summonses under the Factory and Industry Undertaking Ordinance and Occupational Safety & Health Ordinance before 2011, but in 2012 and 2013, the numbers rebounded significantly in all sectors. In general, the public sector demonstrated a better performance than the private sector in this area.

Just over 30% of the currently registered workers are under the age of 40. The number of registered workers in this age group has been decreasing steadily over the last 6 years although the number of registered workers with mandatory basic safety training course (green card) in the same age group has remained largely unchanged. There has been an improvement trend between 2007 and 2012 in the retention rate of graduates for the basic craft courses and Construction Supervisor / Technician Programme provided by the CIC. The retention rate showed a drop by 8.8% in 2013, compared to the year before.

The number of construction related court cases registered at the High Court Registry had been decreasing gradually from 2003 to 2009. A rebound happened in 2010, while the number decreased again in the recent years and recorded the lowest level in 2013, over the past 13 years. The number of arbitration cases in construction industry handled by Hong Kong International Arbitration Centre (HKIAC) increased significantly in 2006 and was kept at a high level during 2007 and 2008. There has been a drastic decreasing trend since 2009. In 2011, the number decreased by 51.9% compared to the year before. The number of labour disputes in construction industry handled by Labour Department (each case involves more than 20 employees) has been decreasing since 2003.

The KPIs for the Hong Kong Construction Industry are classified into 5 areas and presented in 4 categories and 2 sectors as listed in Table 1. Descriptions of the KPIs are provided in Table 2.

The KPIs will be launched by stages based on availability of data and the programme for new data collection. 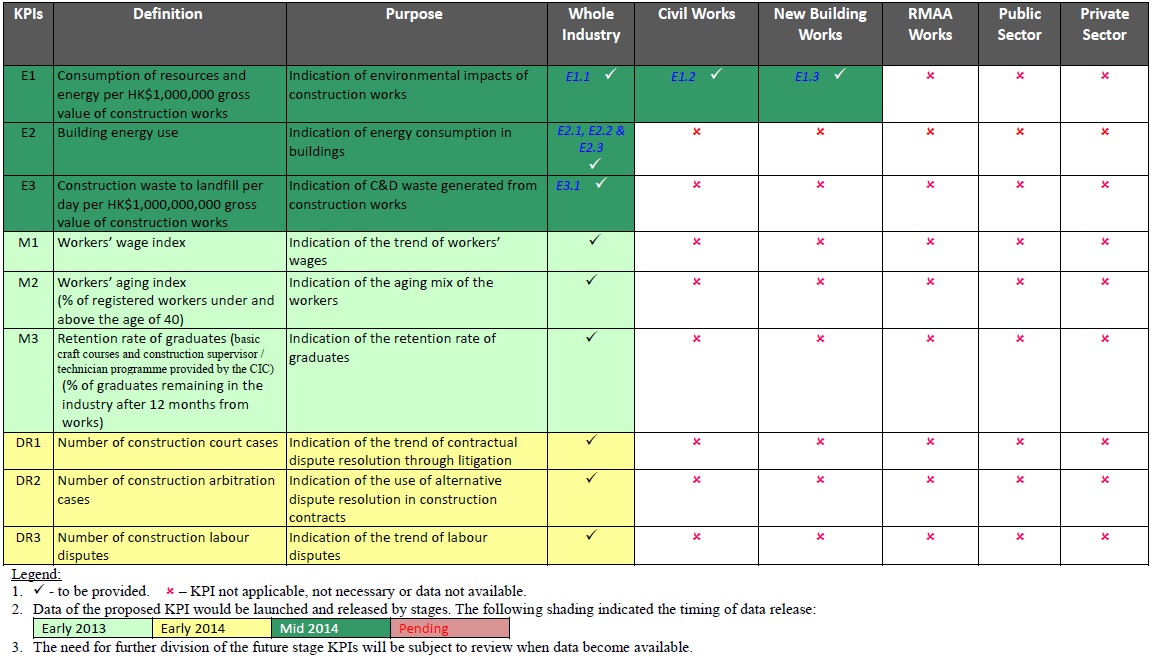 Enquiries on this publication may be made to the CIC Secretariat at:

This publication is prepared by the Construction Industry Council (CIC) in  collaboration with Rider Levett Bucknall Limited (RLB) to report findings on specific subjects for reference by the industry and is not intended to constitute any professional advice on these or any other subjects. Whilst reasonable efforts have been made to ensure the accuracy of the information contained in this publication, the CIC nevertheless would encourage readers to seek appropriate independent advice from their professional advisers where possible and readers should not treat or rely on this publication as a substitute for such professional advice for taking any relevant actions.